Below is an executive summary of this line of research. Please note that each summary describes results and interpretation that may not be final. Final interpretation of results will be in the peer-reviewed literature.

Child restraint systems (CRS) provide an adaptive interface between a developing child and the vehicle seat, limiting the child’s risk for injury or death in the event of a crash. The most common method used to evaluate the dynamic performance of a CRS is a sled test, where a crash sled containing a restrained pediatric anthropomorphic test device (ATD), or crash test dummy, reproduces a crash pulse similar to what is observed in a full-scale vehicle crash. The regulation that governs evaluations of child restraint performance is known as FMVSS 213.

While the ability to run such sled tests and estimate injury potential is essential for the CRS design process, development and implementation of federal regulations has revealed many opportunities to refine the sled test methodology. The long-term goal of this line of research is to influence CRS design and safety by developing a method to provide data-driven assessment of the ability of the regulatory sled test to mimic actual vehicle crashes.

The testing, simulations, and analysis conducted in this phase of research focused on the differences in booster seat performance on vehicle seats compared to the FMVSS 213 bench. There were two distinct tasks in this phase: 1) developing a Finite Element (FE) model of the FMVSS 213 bench with a booster seat and 2) providing a cost-efficient platform to evaluate bench characteristics. As part of the FE model validation process, high rate belt, harness and tether webbing experiments and foam experiments were generated that are proving valuable to the industry. Tether anchor location was varied parametrically in the model to include locations attached to the floor, the roof and the package shelf, and results were compared to matched sled test data. Head and chest acceleration were sensitive to tether anchor location, but head and knee excursion changed minimally across the locations.

Task 2 involved physical sled tests and the examination of retractor vs. no retractor on various kinematic and kinetic ATD metrics and injury criteria. As mentioned above, in year 1 of the project, substantial differences were observed between the booster head excursion on the vehicle seats as compared to the FMVSS 213 bench. It was hypothesized that these differences were due to retractors on the vehicle seat belts, which allow for a certain amount of belt payout during loading, while the seat belt on FMVSS 213 bench clamps the shoulder belt restricting payout. The sled tests revealed head excursion was greater in the retractor condition. The FE model developed in Task 1 was used to confirm these findings.

This body of research provides important insight into the capacity of the FMVSS 213 bench to replicate real-world crash scenarios. Because sled tests are vital to the design and validation of CRS, improvements to the testing protocol based on these analyses may yield increased safety benefits for children in actual motor vehicle crashes.

The second phase, conducted in 2011-2013, our goal was to discover why these differences occur. We determined which characteristics of the regulatory bench seat (seat cushion stiffness, seat belt stiffness, seat belt/LATCH/tether anchor location) led to these differences by utilizing a finite element model of the FMVSS 213 bench with a forward-facing CRS and an appropriately-sized ATD. We conducted a matrix of simulations that evaluated how changes in these parameters influence ATD kinematics in order to identify the set of parameters that result in kinematics that are similar to those observed in the tests on the actual vehicle seats. 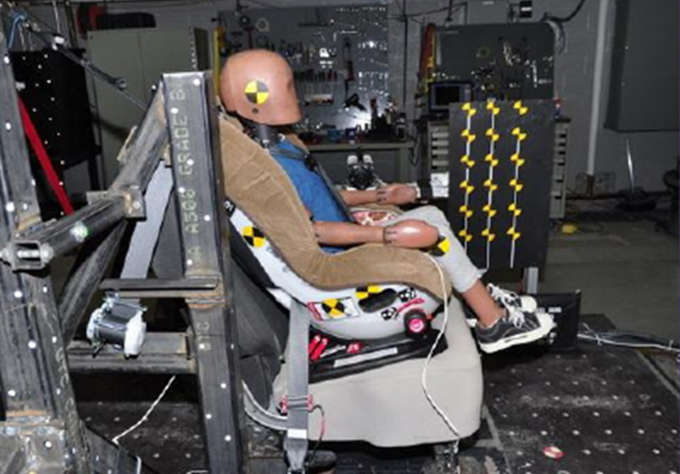 The research team divided the study into two components -- one focused on the sled pulse and one focused on the test bench used in the regulatory sled test. For the sled pulse evaluation, over 1,400 vehicle crash tests were analyzed over a variety of barrier conditions (offset and full-frontal rigid barrier) and over a range of impact speeds (40, 48 and 56 kmph) and vehicle types (SUV, sedan, minivan, etc.). For the test bench evaluation, the research team mounted a selection of vehicle seats and the C/FMVSS 213 bench seat to a crash sled, and mounted child restraints on the seats exposed both to an identical sled acceleration pulse.

Tests were performed in groups, mounting the same model CRS to various vehicle seats and to the sled test bench. The analysis revealed significant differences between the vehicle and bench, depending on how the seats were attached to the vehicle. Differences were also found in performance metrics for the same model forward-facing CRS tested on the vehicles seats and sled bench. The kinematics of CRS attached by LATCH and tether revealed that CRS rotation was uniformly positive (CRS rotates backward) on the bench and overwhelmingly negative (CRS rotates forward) on the vehicle seats. According to the researchers, these fundamental differences in CRS kinematics between the bench and vehicle seat may be highly dependent upon the difference in the location of the tether anchor between the bench and vehicles.

This study helped to quantify the differences between the vehicle and bench seats. This research was conducted in collaboration with the Government of Canada, with all testing conducted at Transport Canada and data analysis conducted primarily at CChIPS.