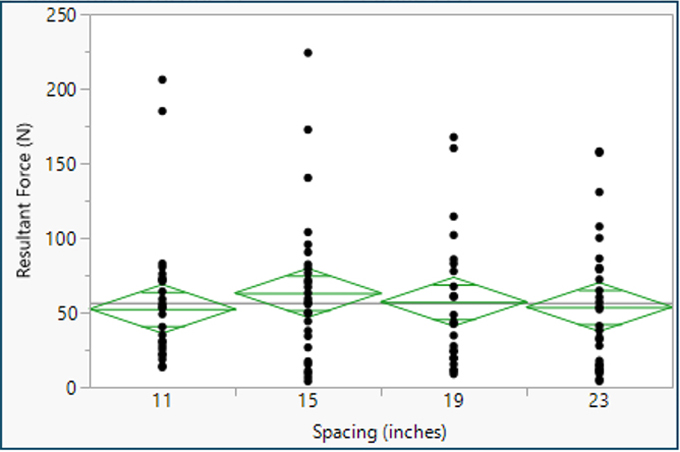 Most passenger vehicles include a LATCH system, which has two lower anchors 11 inches apart that are used to attach a CRS. Typically, two different sets of these anchors are located in the two outboard seat positions. However, the center seating position has been proven to be safer for children in a CRS because it keeps them away from the doors and intrusions into the vehicle in the event of a crash. Many parents want to use the LATCH hardware that already exists in the inboard side of the outboard seat positions to attach the CRS in the center position, but this means the two lower anchors are no longer 11 inches apart.

WHAT DID THE STUDY FIND?

For the third type of CRS, an infant seat, we found that more tension was needed in the lower anchor strap when used in the wider lower anchor configuration. Caregivers typically did not produce enough tension in any of the spacing conditions, but they did trend toward higher tensions when higher tensions were needed.

These outcomes should be considered in tandem with a 2017 CChIPS study, led by Dr. Aditya Belwadi at CHOP, that conducted crash testing to evaluate the performance of the car seat when installed using these configurations.

WHAT ARE THE IMPLICATIONS FOR THESE FINDINGS?

These findings show that caregivers’ installation skills are not very sensitive to lower anchor spacing. In other words, we would not expect to see an increase in CRS misuse if caregivers began installation in non-standard lower anchor seating positions. However, many caregivers do not install a CRS tightly enough in any condition, which can have serious safety implications on child passengers.