WHAT WAS THE PURPOSE OF THE PROJECT?

Although the FAA and the American Academy of Pediatrics recommend using a CRS on airplanes, little research had been conducted regarding CRS use in this setting to inform this guidance for parents. As a start, we wanted to learn about current CRS use by caregivers on planes and the reasons underlying why or why not they were using them.

HOW WAS THE STUDY CONDUCTED?

We surveyed 786 parents and caregivers who had recently traveled by air with a child age 5 or younger about their use or non-use of CRS and other factors that impact their travel experience. We also conducted focus groups with 16 airline personnel to understand their experiences interacting with families traveling with young children. 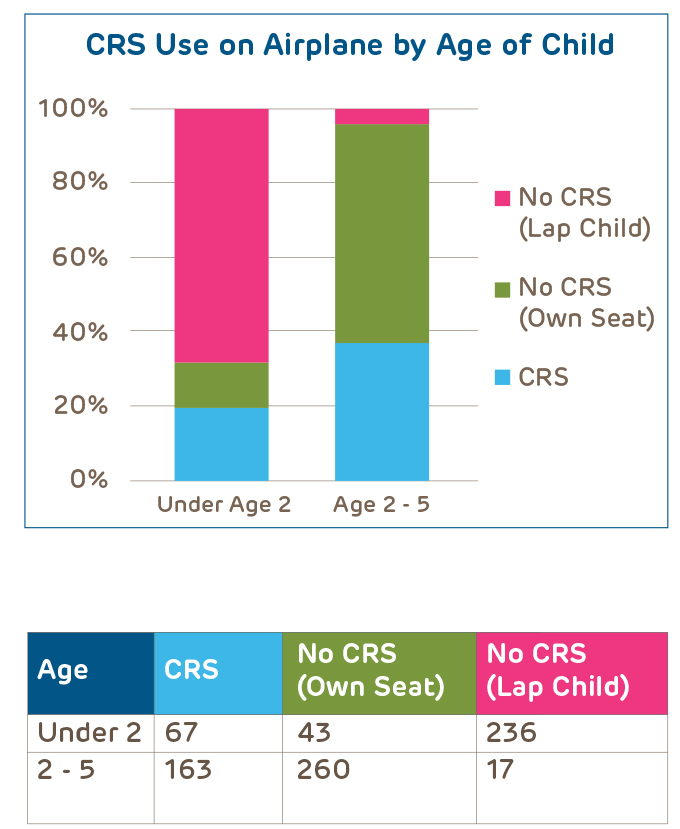 Nearly 40% of children under age 5 sat in their own seat without a CRS, 29% sat in their own seat with a CRS, and 32% were held in a caregiver’s lap. Safety and ease of transporting (i.e., having a place to set the child during the flight and the need to have the CRS at their destination) were primary reasons for choosing to use a CRS. Cost and difficulty of logistics (i.e., carrying the CRS through the airport and installing it in the airplane seat) were cited most often for not using a CRS. Since these families viewed flying as safe, not using a CRS wasn’t seen as an unsafe choice. The focus groups with airline personnel revealed that flight attendants believe that most families do not fully understand their role as trained safety professionals.

WERE ANY OF THE RESULTS SURPRISING?

Many caregivers found it more convenient to use the CRS on the airplane than to travel without it, while others cited specific difficulties with using the CRS. We would like to learn more about what makes the same experience positive or negative for families.

The overall goal is to prevent injury to children. Given how safe air travel is, it might be important to think of the whole trip – making the overall travel experience safer by considering the automobile transportation to and from the airport. Some considerations might include improving the availability of a CRS at their final destination, such as a rental car or ride share. Further, more should be done to encourage more families to fly rather than opt for road travel for long distances.