This is the first project to examine child human volunteers in reclined vehicle seating configurations, which we expect to be more common in autonomous vehicles. With this study we aimed to understand the role of reclined seatback angles in influencing the motion of booster-seated children when exposed to a pre-crash scenario, such as a lateral oblique swerve. All the current research on reclined occupants is done on adults, but we can’t just transfer what we’ve learned about keeping reclined adults safe in autonomous cars to children. We need to learn how to specifically protect children. This research can help.

We tested two types of low back booster seats on 6 children (3 females and 3 males) and found that both boosters are effective in preventing submarining (when the occupant slides under the seat belt) in the reclined seating configurations. We had hypothesized that this might be more common when the seat back is reclined, so the absence of submarining is an important discovery.

WERE ANY OF THE RESULTS SURPRISING?

We discovered that children move less during lateral oblique swerves when the seatback is reclined compared to the upright position. This means that reclined seating configurations can lead to better positioning of children within the shoulder belt in lateral-oblique pre-crash maneuvers. Usually, occupants flex laterally when the seat is in the upright position; but, in the 60-degree reclined seatback angle, which corresponds to a severe recline position, children do not flex but roll slightly on the side. It is important to note that in these tests, the shoulder belt position simulated is attached to the vehicle seat and not to the C-pillar of the vehicle. 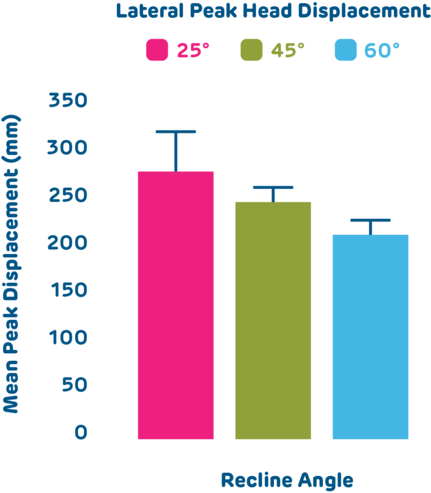