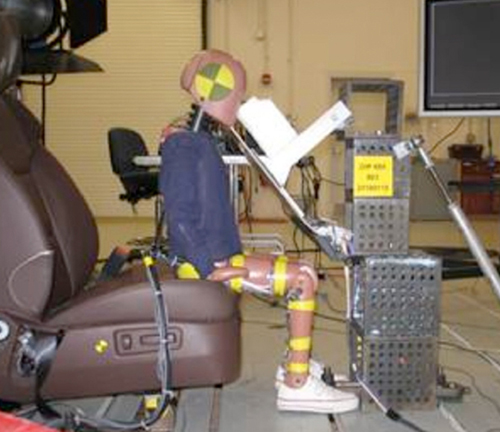 Occasionally, devices designed to protect adults in MVCs can be physically hazardous to children. One example is frontal air bags. Although proven to save adult lives, they also have contributed to the deaths of 159 children between 1993 and 2003. This study was designed to determine what risks, if any, knee bolster air bags pose to child occupants restrained in the front seat. The study was conducted in three steps: 1) to determine the real world population most likely at risk by deployment of this type of air bag and the possible injury mechanisms this group would encounter; 2) to determine how the injury mechanisms can be properly evaluated in automobile testing; 3) to determine the level of risk for pediatric lower extremity injuries due to knee bolster air bags.

Although the majority of the parameters studied did not reflect a high chance of injury, the test with subjects on the edge of the seat indicated the possibility of tibia fracture.

Better data collection methods, such as tibia load cells, should be implemented so that more reliable conclusions can be drawn. Also, the two tests involving subjects leaning back in the seat resulted in extremely high ankle rotation rates. In order to collect meaningful ankle data in the future, the biofidelity of the ankle joint on ATDs must be improved.