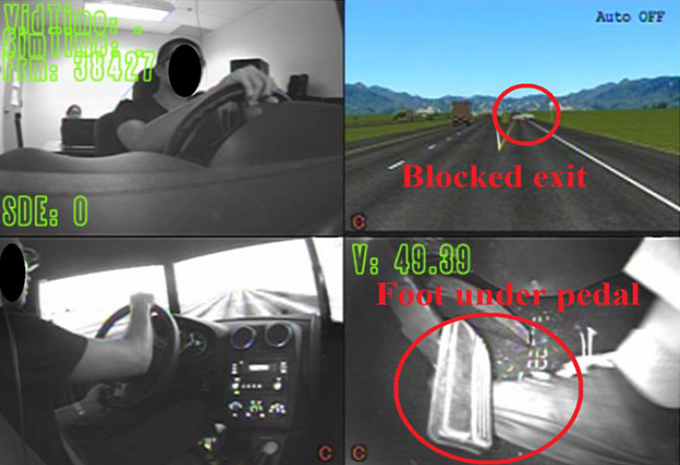 Semi-autonomous vehicles are emerging, with some in the auto industry targeting 2020 for autonomous cars. A high level of vehicle automation has great potential to improve safety by dramatically cutting the traffic fatality rate. The challenge, however, is to deploy these vehicles safely. While the general expectation is that the self-driving technology will bring us ever closer to the Vision Zero objective of no traffic fatalities, it is imperative to consider the safety of self-driving and of the ‘human in the loop’ framework before the technology gets widely deployed. The goal of this project is to assess the human aptitude -- especially teens and novice drivers -- to take over from autonomous to manual mode in response to a warning signal.

Self-driving cars are widely considered the cars of the future, but many people are skeptical of self-driving technology, specifically in its ability to handle dangerous situations and keep passengers safe. However, Tesla crashes have dropped 40% with autopilot installed (NHTSA PE 16-007, 1/19/2017). As of June 9, 2017, over 20 states have passed legislation that permit testing of highly autonomous vehicles on public roads. The CIRP’s driving simulator can be used to see how quickly a driver is able to take control of the car in the event of a malfunction with the autopilot technology.

The objectives of this study were to understand the population’s perception of self-driving. It also aimed to understand how much driving experience is needed to safely take over, as well as how the driver’s age influences the ability to sustain attention. This information will be used to better understand the human factors at play in self- driving technology in order to ensure its safe deployment.

First, the CIRP’s driving simulator was instrumented for self-driving studies. 8 teens and 4 adults were recruited for this study. Before the study, questionnaires were filled out by participants about driving habits and their knowledge about self-driving. Then, they were familiarized with the simulator and given two scenarios. In the first scenario, they were driving on the highway and they subjected to a distraction (collecting change for a toll). They were required to perform an emergency takeover (no warning signal) when the car’s autopilot led them to take a blocked highway exit. In the second scenario, they were driving on a two-way road and had to perform an emergency takeover (no warning signal) to avoid a frontal collision. Throughout the participants’ experience in the two scenarios, their performance was recorded, specifically their cognitive reaction time (eye tracker), their driving behavior (hands on steering wheel, foot on pedals), their decision to steer or brake, and the amount of time they took to stabilize the car. In a post-study questionnaire, participants were  asked  about  their  impression about their self-driving experience as well as their anticipated comfort with self-driving in the future.

The questionnaires revealed almost universal comfort with autonomous technology but not universal attraction to it. Participants were evenly split over being trusting or distrusting in the technology. In the driving simulation, it took an average of around 3 seconds for the drivers to respond. In the two-way road scenario, 38% of the teen drivers (n = 8) crashed while 25% of adults (n = 4) crashed; 17% of females (n = 6) crashed while 50% of males (n = 6) crashed (sample too small to generate statistically significant results).

The results could imply that teen drivers would react more slowly in emergency autonomous to manual takeovers, leading to more crashes. Further analysis of the preliminary data will lead to better understanding of reaction times and driving behavior. A larger study of 36 participants will leverage the methods developed in Year 1 to provide significant results and guidance for technology development and legislation.