WHAT WAS THE PURPOSE OF THIS PROJECT AND HOW WAS IT CONDUCTED?

The federal regulation in the US for testing child restraints, FMVSS 213, utilizes a crash pulse representing a Delta V (change in velocity) of 30 mph. Prior research published in 1998 suggested this crash pulse is within the range of frontal crashes that can result in serious or fatal injury, based on the Abbreviated Injury Scale (AIS). However, the data for this research are somewhat outdated and limited: The data source was the federal National Automotive Sampling System – Crashworthiness Data System (NASS-CDS) from the early 1990’s that only included front seat occupants. Rear seat occupants, including most child occupants, were not included.

To update these analyses, our project aims were two-fold: 1) use more current data to establish the updated relationship between Delta V and injury severity for occupants of all ages; 2) compare crash pulse characteristics – peak, duration, shape, etc. – between regulatory test pulses (FMVSS 213, the European standard: ECE R44, and the pulse used by Consumer Reports for its vehicle crash tests) and full-scale vehicle crash tests matched to NASS-CDS data. We utilized the most recent five years of available NASS-CDS data (2010-2015) and extracted crash, vehicle, and occupant data for frontal crashes.

WHAT WERE THE FINDINGS? 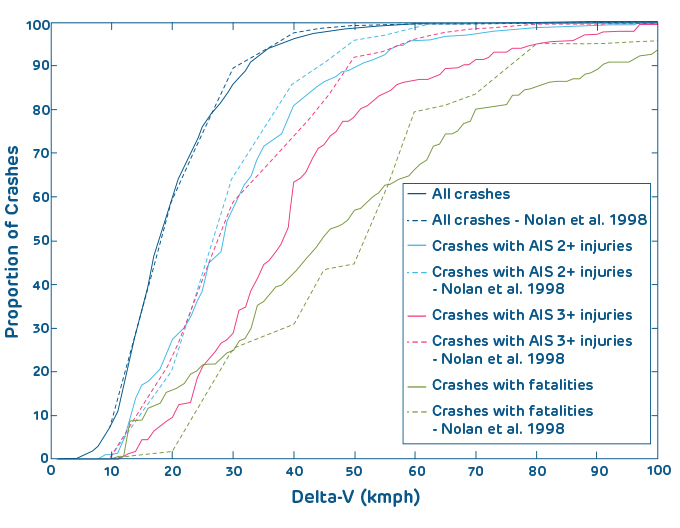 For Aim 1, we found that when compared to the 1998 analyses, our more current analysis determined that a lower proportion of crashes with AIS 2+ and AIS 3+ injuries occurred at the same Delta V. We attributed this result to advances in passive safety, restraints, and in-vehicle technology in the more modern time frame we studied. For Aim 2, we found that the three regulatory crash pulses are generally within the boundaries of the full-scale vehicle crash tests matched to the most recent NASS-CDS data. However, we did identify some specific differences in pulse characteristics, such as maximum deceleration, onset rate, Delta V, and time of deceleration, that might need to be re-visited in the future.

WHAT ARE THE IMPLICATIONS FOR INDUSTRY AND WHAT’S NEXT?

Our study provides evidence for vehicle manufacturers that advanced vehicle technology is effective at preventing serious injury. For future work, this project on frontal crashes points to the need to conduct similar analyses that inform regulatory pulses for lateral or oblique crashes.