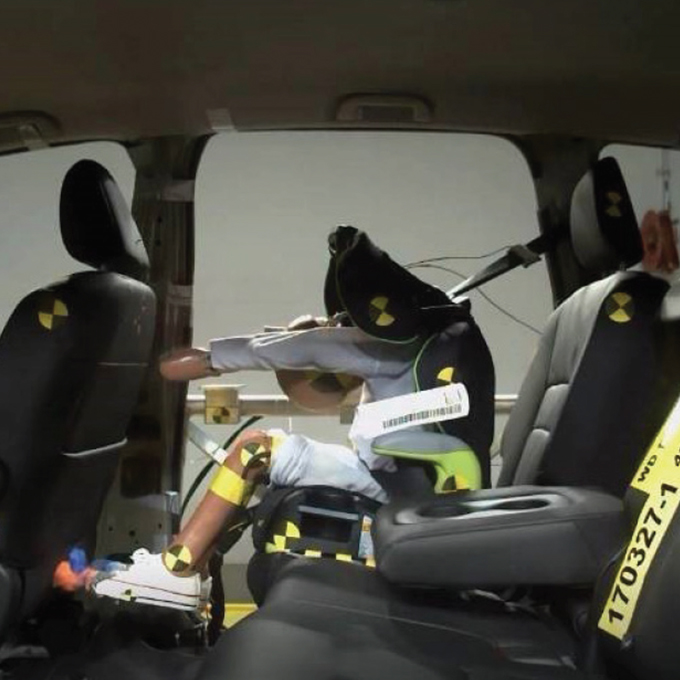 This research sought to expand our understanding of how the ATD legs interact with the front seatback during a frontal collision using a prototype Hybrid III 6 year-old ATD Lower Extremity (ATD-LE). Specifically, quantifying the forces and moments recorded by the ATD-LE leg during a variety of simulated frontal collisions using a rigid and a soft front seatback.

A series of sled tests were conducted to simulate a frontal vehicle crash using a ΔV = 48 km/h (FMVSS 213 pulse). A 2016 Honda Pilot white body, production rear seat, and production front seat with a modified seatback, were attached to the sled apparatus. The ATD-LE was seated in a new high back booster seat for each test. A total of eight sled tests were conducted. Four of the sled tests used a rigid font seatback (with a wood insert) and four sled tests used a soft front seatback (using a foam insert). Two leg positions (legs relaxed and toes touching the front seatback) and two front seatback positions (seat forward and seat backward) were also evaluated with the rigid and soft front seatbacks. In addition to recording the forces and moments from the tibia load cell of the ATD-LE, excursions of the head, knees, ankle, and booster seat were also quantified. High speed cameras were used to obtain general kinematics of the ATD during each test.

The rigid front seatback condition overall recorded higher tibia forces, moments, and tibia indices than the foam front seatback. Specifically, the rigid front seatback condition with the seat in the backward position with the toes touching, resulted in the highest tibia bending moment, with a mean bending moment of 88.9 Nm, well over the injury threshold of 57.6 Nm. This scenario also had the highest tibia index out of all of the sled tests with a mean tibia index of 1.28 (injury threshold = 1.1). Most interesting was that one of the foam seatback sled tests (seat in the backward position with the legs relaxed), did exceed injury threshold for tibia moment. It was later determined that the feet did not interact with the foam, but rather the lower seat frame, causing this increase in moment. No excursion limits were exceeded.

Front seatback material does appear to make a difference in injury potential, however the amount of space between the front and rear seat is also important in determining what part of the leg/foot will interact first. There appears to be injury potential regardless if the leg is relaxed prior to a crash or if the toes are touching the front seatback. These data provide the first experimental look into the biomechanical response of a rear-seated 6 year-old ATD during a frontal collision with a front seatback using the ATD-LE. There is potential for widespread application and may benefit CRS manufacturers, rear-seat occupant design engineers, and modelers. Additionally, this project provides evidence that the use of a front seatback during sled testing provides an important realistic environment which has greater potential to improve rear seat safety for the child occupant than the current testing procedures.